Why Use Thermal Imaging on Electrical Systems?

HomeNewsWhy Use Thermal Imaging on Electrical Systems?
by in News 1339

Thermal Imaging is a technology that takes advantage of thermal differences in various objects and surfaces to check for faults and breakdowns in various systems. Thermal imaging has found a wide range of applications in electrical systems.

How Does Thermal Imaging on Electrical Systems Work?

While such a component might keep working and appear normal to the naked eye, it is always bound to fail sooner or later. Thermal imaging can help avoid breakdowns. Inspectors are able to catch and recommend maintenance and repairs before interruptions occur.

It is the emitted rays that the imaging camera captures and uses to gauge the temperature of a certain object. Basically, the inspection of electrical components using thermal imaging technology involves non-contact temperature measurements. The intensity of the infrared emission determines the temperature reading. High intensity depicts high temperatures.

In addition, the imaging cameras have a screen on which they display heat maps. The screen shows the shapes of the various objects being investigated with different colors based on their thermal emissivity. The colors range along the wavelength spectrum.

During thermal imaging inspection of electric systems, inspectors usually capture images and photos of various components in your home and take time to inspect them. They are normally looking for any abnormalities in temperature levels. As mentioned earlier, such abnormalities indicate that that particular component might be under stress, and is bound to fail.

The inspectors will then prepare a comprehensive report, and provide maintained and repair recommendations. This report serves as the guideline during the maintenance and repair procedures. Inspections are not a one-off task. They ought to be carried out periodically. All the components on an electrical system are prone to wear and tear. They have to be inspected regularly and maintained properly, to ensure you never experience any sort of breakdowns.

The benefits of carrying our thermal imaging inspection on electrical systems, be it at home or in a factory are many. Below we explore some of these benefits.

As we have mentioned above, electrical systems whether at home or in a factory need to be inspected regularly.  One of the major insurance companies in the US estimate that up to 25% off electrical failures are caused by faulty connections or components.  If these issues can be addressed early enough, a lot of losses could be avoided. Losses are avoided in the sense that thermal imaging inspections can help avoid breakdowns.

One of the most outstanding aspects of the use of infrared imaging cameras, it that it is a non-contact way of measuring temperature and doing inspections. Take for instance the case of factories. Electrical systems in a factory usually involve high voltage and are extremely hazardous. Getting close to live components in such a system is getting yourself into some serious risk. Any other kind of inspection in such a setting would involve shutting down the systems, which translates into downtime and possibly loses.

Also, since thermal imaging is a non-contact method, none of the systems needs to be shut down during the inspection. In fact, the inspection must be carried out while the systems are still running, in order to identify any faults that might be there. Last but not least, thermal imaging does not require you to demolish or remove any sections of a building in order to access the electrical components. The imaging cameras are able to image the components while they are behind walls or above ceilings, so long as the surrounding surfaces have uniform temperatures.

Below is a list of some of the problems that thermal imaging can detect.

Being able to detect impending electrical faults through thermal imagining can save money for the establishment in many ways. Some of them are listed below.

Almost all electric faults have something to do with abnormal heating. This might be caused by different factors such as high resistance, excessive current flow, and many others. That is why thermal imaging is very effective in inspecting electrical systems. Before we get to the actual electrical components, here are a few important things to note.

Thermal imaging inspections are only carried out when the system is on load. If possible, you need to have the system at its peak load, so that you can clearly see the performance of various components in the worst-case scenarios. Basically, the more the load of you on the system, the easy it will be to detect the problems. You should factor in the effect of the wind and air movement as well.

Thermal imaging inspections are not about surface temperatures. While the imaging cameras can show images of electrical components while they are behind other surfaces such as walls, it is important that you image them directly. Take, for instance, solid metal bus trays and electrical cabinets. These enclosures can significantly interfere with the performance of the electrical components inside them, especially if they are in contact with them.

If possible, the enclosures should be removed before you start imaging. You can choose to image them first before you go inside as well. They might give you an impression of what to expect. For instance, if you find the surface of an electrical cabinet to be extremely hot, you have to know the components inside can only be hotter, and there is a serious problem.

In cases where the electrical components being imaged are behind walls, you may not be able to image them directly. You should try to image the components when the surface temperature of the walls is quite uniform.

Below are the commonly inspected electrical components or issues.

Loose connections cause the conductor to start heating up at that point. When a connection is loose, it allows air and other compounds in the spaces present. This causes high resistance to current flow. While current might continue to flow, such connection often causes loss of energy and sparks which might cause a fire.

We had already mentioned that thermal imaging takes advantage of heat different. When the area around a loose connection gets hotter than the surrounding areas, the imaging camera can quite easily pick it up. The actual point of heating is always small and therefore very distinctive. Modern thermal imaging cameras are very powerful and will pick up very subtle heat differences. These differences are often an indication that immediate attention is required.

Thermal imaging is also quite effective in identifying overloaded circuits. Circuit overloads cannot be identified by a single overheating instance like loose connections. Most circuits will be made of various electrical components and conductors. An overloaded circuit is determined by a series of possible faults throughout the circuit.

Circuit overload might have a significant impact on your energy bills. Most of the excess current is lost as heat. A significant rise in your normal electricity bills should prompt you to get a thermal imaging inspection conducted on your electrical systems.

Transformers are used to step-down electric current for easy distribution. A large factory will certainly have a transformer or two, and they will need to be inspected regularly. Large residential buildings have dedicated transformers as well.

A transformer is normally a large electrical component and has various parts. It might develop a problem in one section, but still, continue functioning. Inspecting a transformer involves imaging both the exterior and interior parts. Inspecting transformers might require more than one type of infrared imaging camera.

Inside the transformer are coils that and oil. The exterior of the transformer mainly consists of if the enclosure and bushings for input and output. The imaging cameras have to check the temperature of the coils inside and determine whether they are working optimally. Overheating coils might indicate that the transformer is overloaded, or there is an oil spillage. Oil is responsible for cooling the coils. If it spills, the coils will overheat.

Imaging the exterior of the transformer is quite easy. The exterior only features the bushings, where overheating might indicate either too much load or loose connections. Transformer inspections can help determine whether a faulty transformer should be repaired or replaced. They also help in establishing the urgency of the issue at hand. Repairing or replacing a transformer, especially when it has interior issues is often a complicated process.

Get in touch with a reputable thermal imaging inspection company today, and get your electrical systems checked. It will certainly save you a significant amount of money if you can avoid impending breakdowns.

Why is Thermography Needed for Testing of Electrical Panel?
Essential Guide for Methods of Thermography Inspections
Thermo Élite Inc
5.0
Based on 7 reviews 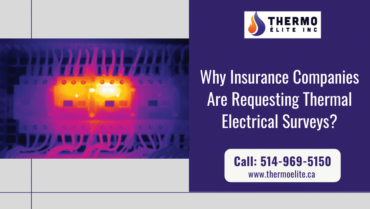 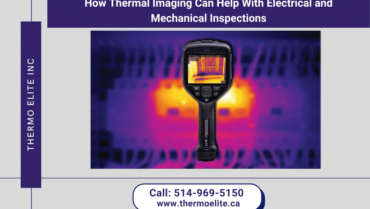